The hostage drama at the Apple Store in Amsterdam comes to an end as police run over a gunman after he fled the building pursuing one of dozens of captives he held for five hours, making a break for freedom

By Katie Weston for Mailonline

Police overthrew a gunman who held dozens of people hostage at an Apple store in Amsterdam for five hours on Tuesday night.

Footage shows the attacker chasing a fleeing captive before he was suddenly hit by a car in Leidseplein – a square in the center of the Dutch capital.

Amsterdam police said: ‘We managed to arrest the hostage taker by beating him as he fled. Violent footage of this collision can be seen.

“We now know the suspect had no explosives on his body and medical personnel are now dealing with him.”

An earlier clip showed a man in a headache with what appeared to be a gun pointed at his head inside the store.

The hostage taker could be seen waving around the gun as he gestured to customers seated at a restaurant across the street.

Local media suggest the attacker is an armed robber, but this has not been confirmed.

Police said at 9.15pm that “dozens” of people had left the building since the incident began around 5.40pm.

The force added: “They go to a police station for a witness statement and of course for follow-up such as victim support.” 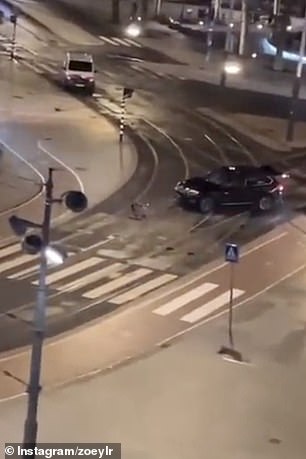 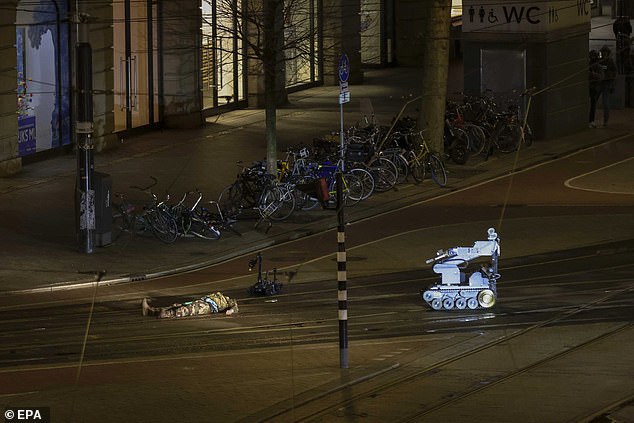 The hostage taker stands next to a police robot on the street shortly after the incident in the Apple Store ended. Police say the suspect had no explosives on his body 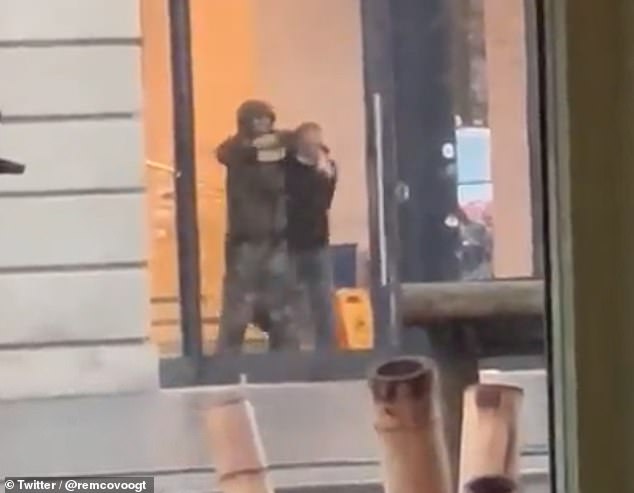 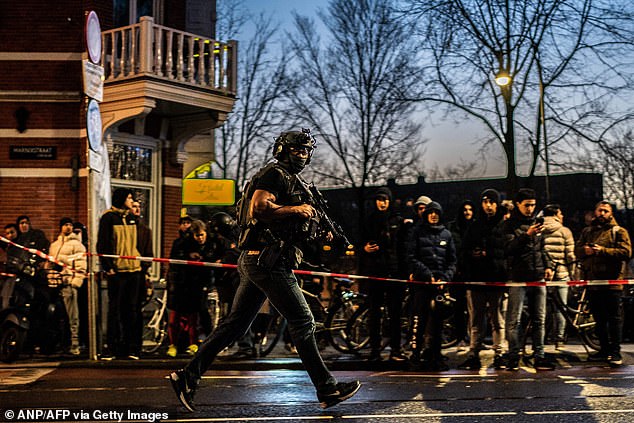 Police initially said: ‘Due to a report at a shop in Leidseplein, police are now deployed there. More information will follow via this Twitter channel.

In an update at around 5.55pm, he added: ‘There is someone with a gun in/near the store in question, the police are on site with numerous (specialist) units to bring the situation under control.’

Another statement said they were reluctant to provide information “so as not to disrupt our investigation and our efforts there”.

The force said at 7 p.m. that a “hostage situation” was underway, before confirming about an hour later that “several people were able to leave”.

A witness said they had to “run for their lives” after hearing gunshots.

They told the Dutch channel AT5: ‘I was standing on the zebra crossing in front of the apple store. An employee came out in a panic with a walkie-talkie screaming. 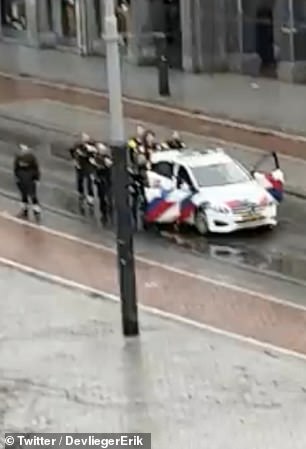 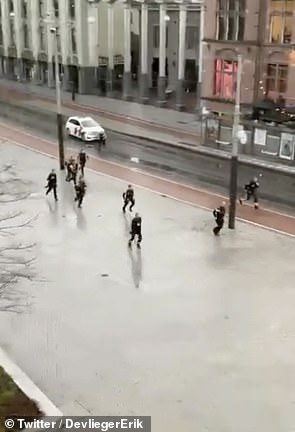 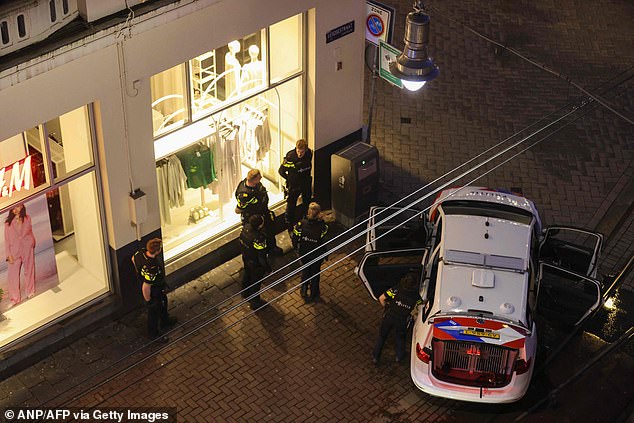 Armed officers are seen standing near a police vehicle near Leidseplein during the hostage crisis. Members of the public were asked to stay away from the site 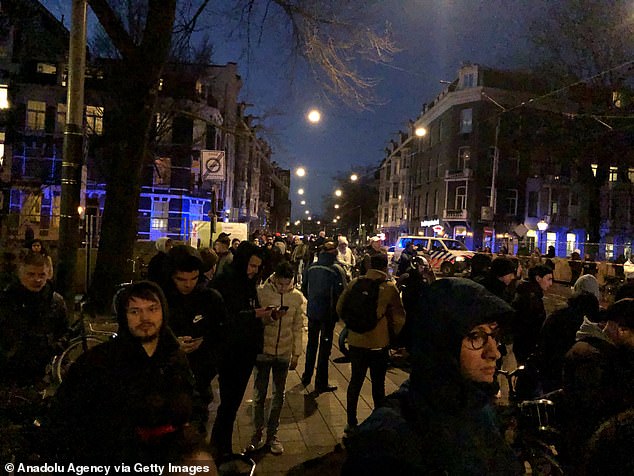 “At that time, the penny had not yet fallen and I was about to cross the zebra crossing in front of the entrance to the Apple Store.

“And that’s when I heard gunshots inside.”

Members of the public had been told to stay away from the site so police could “focus on handling the situation”.

“The policeman on the tape talks about a ‘possible explosion hazard’.

Apple said: “We are incredibly grateful and relieved that our employees and customers in Amsterdam are safe after this terrifying experience.

“We would like to thank local law enforcement for their outstanding work and ongoing investigation.

“Our teams and customers acted quickly and showed incredible strength and resolve, and we are so grateful for the support and care they have shown each other in such difficult circumstances.” 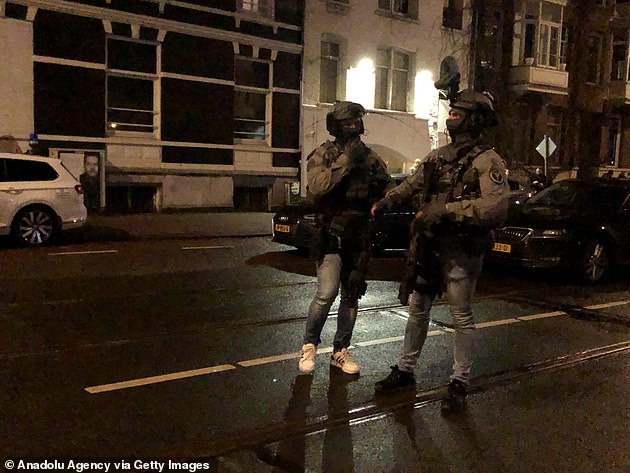 Security forces take action around the store during the hostage situation. A witness claimed they had to ‘run for their lives’ after hearing gunshots 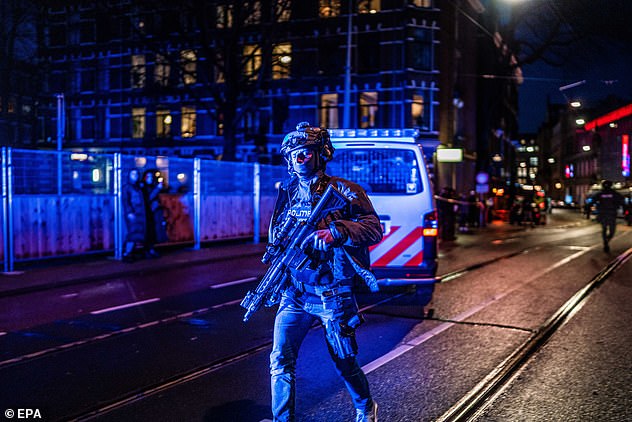 Members of the DSI arrive at the scene of a hostage situation at the Apple Store in Leidseplein, Amsterdam on Tuesday